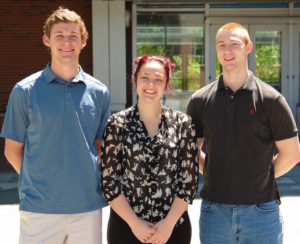 A team of three NC State undergraduates, Davis Atkinson, Graham Pash and Jaye Sudweeks, has been named an Outstanding Winner of the 2017 COMAP Mathematical Contest in Modeling (MCM), which has been held annually since 1985.  “Outstanding Winner” designates the top 13 of 8843 participating teams.  Pash and Sudweeks are math majors; Atkinson in majoring in Science, Technology and Society.  Just two of the top MCM teams were from the United States.  The NC State students addressed the problem of modeling and simulating a highway toll facility, for which they were asked to consider the impact of self-driving vehicles, surges of heavy traffic, and human versus automatic toll collectors.  They had 99 hours to develop the models, perform the simulations and write the report.  For more on how they tackled their problem, see this College of Sciences news story. The NC State team was also designated a SIAM Prize Recipient, with a $500 cash award, as well as an MAA Prize Recipient, with funding to present their results at the MAA MathFest 2017.  More details are here and here.