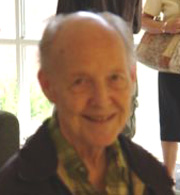 Donald J. Hansen, who taught mathematics at NC State from 1962 to 1996, passed away in Raleigh on July 23. Hansen received his Ph.D. from the University of Texas at Austin in 1962 and came to NC State the same year. His research interest was algebra; he published ten papers on partially-ordered algebraic systems. Hansen introduced NC State’s first undergraduate course in number theory in 1969 and taught it almost every year until he retired in 1996. In 1984 Hansen took on the job of building liaison for Harrelson Hall, then the home of the Mathematics Department. He did a superb job watching over Harrelson Hall and making sure everything was in working order. Whenever a conference or meeting was held in Harrelson, Hansen was there to see that everything was going smoothly. A year after his retirement Hansen agreed to return as building liaison. He handled this responsibility until the department moved into SAS Hall in 2009.