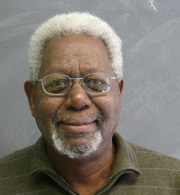 Professor  Fauntleroy passed away unexpectedly on October 19, 2017. The memorial service for Professor Fauntleroy will be held on Saturday, November 11, at 2 pm at the Eno River Unitarian Universalist Fellowship in Durham. In lieu of flowers, memorial contributions in his honor can be made to either the Eno River Fellowship Foundation (http://eruuf.org/giving/fellowship-foundation/), Durham CAN (http://www.durhamcan.org/), or the NC chapter of the NAACP (https://naacpnc.org/). Online condolences can be made at www.russellfuneralservice.com (RUSSELL).
Professor Fauntleroy received his Ph.D. in mathematics from Northwestern University in 1970.  He studied actions of algebraic groups on projective algebraic varieties and their applications. Professor Fauntleroy had been on the faculties of DePaul University, the University of Illinois at Urbana-Champaign and the City College of the City University of New York. He had been a Professor at North Carolina State University since 1986 and retired in 2013.